On March 1, 1961 President Kennedy signed an executive order establishing the Peace Corps. He asked Americans how many of them would be willing to serve their country and the cause of peace by living and working in the developing world. Thousands answered the call in 1961 and 750 were chosen to serve in 13 nations. Since then, over 220,000 Americans have answered President Kennedy's enduring call to join the Peace Corps.

These early Peace Corps Volunteers were inspired by President Kennedy's call and shared that hope with others. 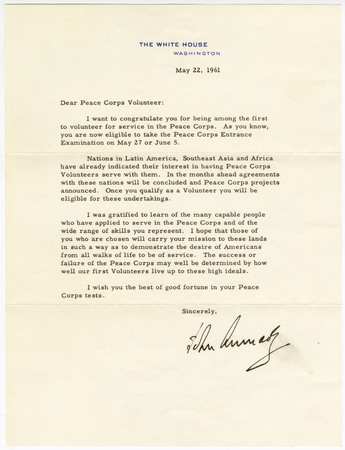 Letter to Maureen Carroll from President Kennedy, 22 May 1961

In 1961, Maureen Carroll (Philippines 1961-1963) "answered the call" to serve as a teacher's aid in the Philippines. Like other PCVs at the time, she received this form letter from President Kennedy.

I was gratified to learn of the many capable people who have applied to serve in the Peace Corps and of the wide range of skills you represent. I hope that those of you who are chosen will carry your mission to these lands in such a way as to demonstrate the desire of Americans from all walks of life to be of service. The success or failure of the Peace Corps may well be determined by how well our first Volunteers live up to these high ideals.

In the form letter, President Kennedy expresses his best wishes and offers support to Carroll as she moves through the examination process. 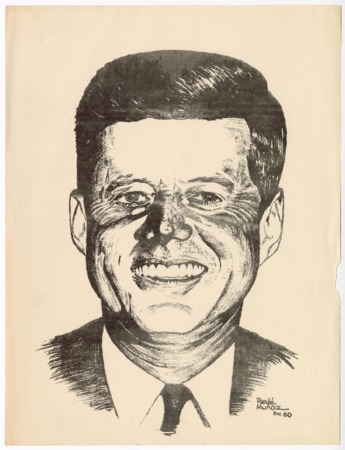 PCV Tom Mullin kept this poster depicting President Kennedy after his visit to Colombia in December 1961. 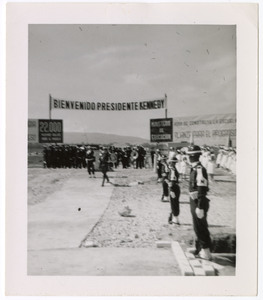 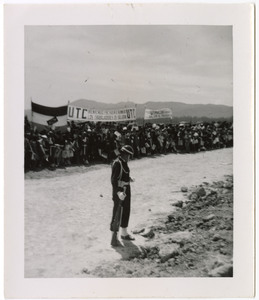 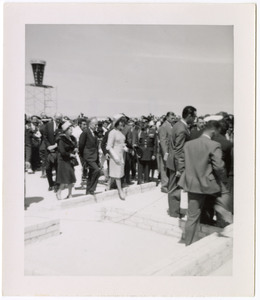 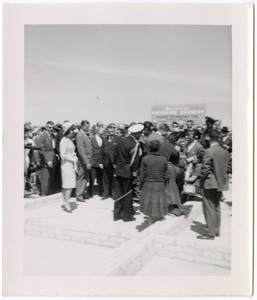 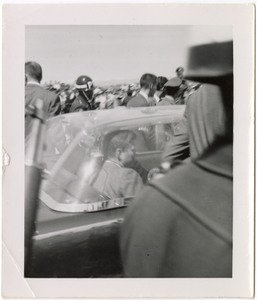 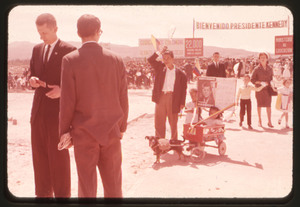 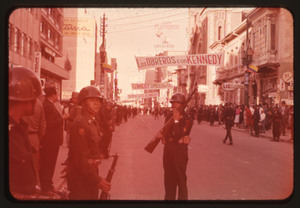 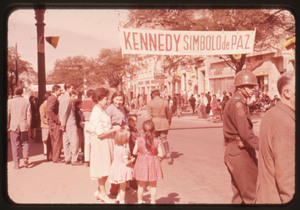 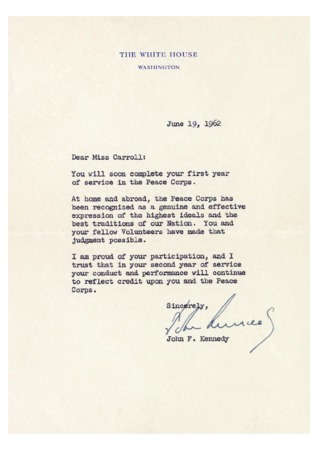 In another letter to Maureen Carroll (Philippines 1961-1963), President Kennedy shares further inspiration and appreciation of Peace Corps Volunteers across the globe.

At home and abroad, the Peace Corps has been recognized as a genuine and effective expression of the highest ideals and the best traditions of our Nation. You and your fellow Volunteers have made that judgment possible.

I am proud of your participation, and I trust that in your second year of service your conduct and performance will continue to reflect credit upon you and the Peace Corps. 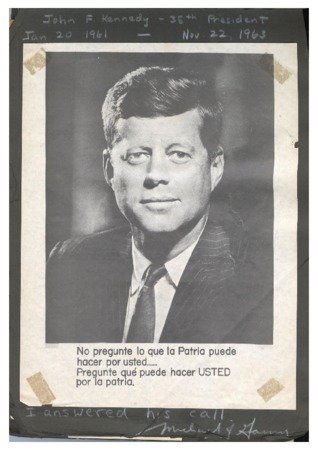 "I Answered His Call" page from Michael Gainor's scrapbook

When news of President Kennedy's assassination reached Peace Corps Volunteers, they mourned for him and shared their inspiration, sadness, fear, and hope for the future with friends and family abroad and in the United States.

Peace Corps Volunteer Michael Gainor (Colombia 1963-1965) added this poster of President Kennedy to his scrapbook with the words "I answered his call."

Geer Wilcox was a blind Peace Corps Volunteer who served in the Dominican Republic 1963-1965. He worked in Santo Domingo at the National School for the Blind (Escuela Nacional de Ciego) educating blind students as tradesmen. Wilcox corresponded with his family via dictated correspondence recorded on open reel audio tapes that he and his family mailed back and forth. In this clip from a letter home on November 30, 1963, Wilcox shares his reactions to the assassination of President John F. Kennedy. 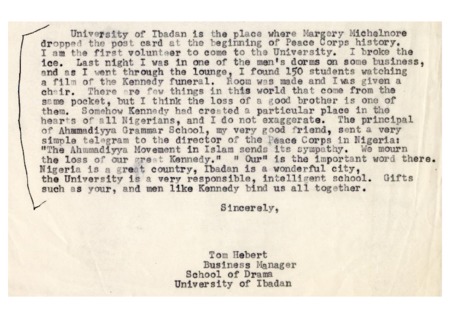 Peace Corps Volunteer Tom Hebert (Nigeria 1962-1964) shares the reach of President Kennedy's leadership in a letter to his drama teacher back at home on December 5, 1963.

Last night I was in one of the men's dorms on some business and as I went through the lounge, I found 150 students watching a film of the Kennedy funeral. Room was made and I was given a chair. There are few things in this world that come from the same pocket, but I think the loss of a good brother is one of them. Somehow Kennedy had created a particular place in the hearts of all Nigerians, and I do not exaggerate. The principal of Ahmmadiyya Grammar School, my very good friend, sent a very simple telegram to the director of the Peace Corps in Nigeria: "The Ahmmadiyya Movement in Islam sends its sympathy. We mourn the loss of our great Kennedy." "Our" is the important word there. Nigeria is a great country, Ibadan is a wonderful city, the University is a very responsible, intelligent school. Gifts such as yours, and men like Kennedy bind us all together.

Please explore the rest of the exhibit to learn more about the Peace Corps and its Volunteers.